The Food Revolution Needs YOU!

The Food Revolution Needs YOU! 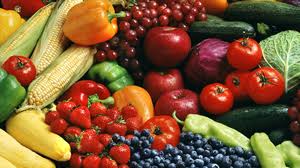 Jamie Oliver and his food revolution came to my neighborhood not long ago.  I have a little mom-crush on him, and hope he manages to outmaneuver the LAUSD in his quest to bring some food reform to their antiquated school lunch program.   It’s very “of the moment” that he made his way over to our part of town, because we are sandwiched northeast of downtown, between uber hip  Silverlake and trendy-hip Eagle Rock.  I like to think we are “hyper hip and trendy but no one knows it yet except us”.  Our neighborhood is Glassell Park, and although there are parts of the area that are solidly blue-collar/working class (the people to whom Jamie apparently hopes to reach with his incentives to eat healthier), we proudly have the first LA neighborhood produce cooperative right here on my hill, started over 2 years ago by my neighbor and voice over actor, Hynden Walch.  We pool all our backyard fruit tree and garden produce and divvy it up among the 30 to 40 households who participate each month.

GP also has an always packed micro-brewery with an on-site pub and a rotating variety of visiting popular food trucks.  (Although the brewery bills itself as the “Eagle Rock Brewery”, they are really in GP and don’t want to own that fact, which is slightly irritating.  Hopefully they will realize the error of their ways before long, and jump on the GP trend train while there’s still room.)  And now we have the 70-year old Greek burger ‘n burrito fast food joint, Patra’s, sporting a face lift and a special Jamie Oliver designed “healthy alternatives to fast food” menu. 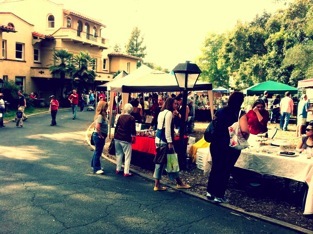 Meanwhile, the LA Times ran a nice big article yesterday about our neighbors even further off the hipster grid of mainstream LA culture, yet who are participating in their version of an up-to-the-minute food revolution:  the Altadena Urban Farmer’s Market.  As an unincorporated part of L.A. County, Altadena is free from the restrictive zoning laws of nearby cities.  It’s OK to keep poultry and many kinds of livestock, a task made easier by the community’s large lot sizes.  Add in a history of being home to artists, musicians and assorted free spirits, and it has given rise to a very vibrant urban homesteading movement.   The AUFM states on its website, they are a “market at which community members sell home grown and homemade stuff, mostly food, to each other to encourage more local food production, and make that food easily accessible to AD residents.  Our mission is to encourage more local food production, and through  a partnership with the Arroyo Time Bank, to make buying locally grown food possible for those with limited financial resources.”   Which means if you can’t grow any food, you can trade or barter your other skills with the people who do.  Close to 500 people are now attending the monthly AUFMs.

Outside our fair city, there is a food activist, author, and farmer named Joel Salatin, whom the New York Times dubs the “High Priest of the Pasture”.  He was recently interviewed by the Vancouver Sun in advance of the food security conference hosted by the B.C. Association of Farmers’ Markets and the Richmond Food Security Society. “While the world reels from global oil shock and rising food prices, the time is ripe to revolutionize the way we produce food and local food systems.  The integrity of our food systems is in question.  ‘Local food sheds’ can insulate us from the vagaries of the outside world”, Salatin told the Sun’s reporter.  He also says the notion that local food is the sole province of foodies and the rich is outdated and possibly dangerous to our survival.

“Reliance on food from abroad and food produced with huge petroleum energy inputs leaves communities at the mercy of world events that are beyond our control.  It also ignores an essential truth about farming:  food production is, at its heart, a biological and not an industrial process. This is a moment in history in which we can change the way we farm to be transparent and sustainable, creating nutrient dense, ecologically friendly food,” he said in the interview.

“Up to half of all the food grown in North America is lost to spoilage due to processing, packaging, storage and shipping, all products of a food system that is overly centralized”, he said. “By creating local food sheds, with a smaller geographical footprint, what we will end up with is a symbiotic, integrated, collaborative relationship between food systems, the people and the place we live,” he said. Boulevards and yards are spaces that could grow food, space that you seldom see wasted on lawns in countries such as Italy, where land is scarce and precious. “In the U.S. we have 35 billion acres of lawn,” he laughed, but not too hard.

Dear Readers, this is THE moment in history in which we have NO choice but to change.  I must say, I feel very hopeful, as evidenced by all the stories I’ve just mentioned here.  The rise of farmers’ markets, growing support for local sustainable food systems and a resurgence of interest in the small scale market farming is evidence that the revolution is underway.    But it needs YOUR participation, your support, your energy, your truth-telling.   Organize something similar in your own neighborhood, or research and patronize groups already under way.   In any way that you can, become a part of the food revolution.  It’s very satisfying to scratch the rebel itch, comrade, however small it may be.