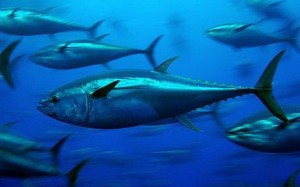 They are, sadly, on their way out.   A report by the Species Survival Commission,  released this past Spring,  found that 40 species of fish that live in the Mediterranean could disappear in just a few years due to overfishing, pollution, and habitat deterioration.     Additionally, there is a huge kerfuffle about the mighty bluefin tuna stocks in the Atlantic and the Pacific:  they are plummeting into an endangered status, despite the US government’s reluctance to list them as such (they were recently listed with a “concerned” status).  It goes without saying that this is very serious.   Some of the most popular fish are in danger, besides the bluefin tuna, dusky grouper, sea bass and hake.  Many consider blue fish to be the best tasting tuna and it is often used in sushi (distinguished as maguro or toro).   Almost half the species of Mediterranean sharks and rays are endangered.

Nearly all fish and shellfish contain traces of mercury, which can cause major harm to the nervous system, especially for pregnant women, nursing mothers, and young children.   Mercury is released into the air through industrial pollution, which then falls from the air and is absorbed into streams and oceans where fish live.   Raw and undercooked fish can also lead to parasite infection.   Fish is often credited for having healthy omega-3 fatty acid content, which they intake when eating algae and wild plants. However, this nutrient can become unstable when fish die, which produces free radicals detrimental to the body.

Though salmon is not on this endangered list, some of the wild caught species are also expected to go extinct in less than 10 years.  The salmon that are raised in factory farms,  are fed antibiotics and often have lice problems that kill wild fish in nearby rivers and streams. Artificial coloring is often added to salmon to make it look fresh and pink, which is a whole other health issue.

So what can you do to make a difference? Stop eating fish. 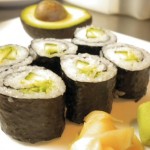 As radical as this sounds if you are a fish lover, it may be the only solution that if practiced voluntarily now, by concerned citizens the world over, could prevent it from being a mandatory fact of life in the near future. If  you’re worried about where you’ll get the same health benefits, here are some ideas:

Fans of the Eco-Vegan Gal Facebook page shared some of their advice on avoiding fish:

If you do not want to give up fish entirely (at least not yet), here are some tips from Greenpeace on how to eat seafood responsibly: