Cleopatra, knew a good thing when she saw it.  This queen of ancient beauty was legendary for her magically youthful looks throughout her whole life, even as she got older. The real secret to the beauty of her silky skin was the anti aging effect of bath salts, mud and cosmetics made with Dead Sea salt.  It was gathered for her at the factories she had built on the shores of the nearby sea (now located between the countries of Israel and Jordon).  The ruins of those factories from the First Century B.C., can still be seen today at Erin Brooke and Erin Geed and they stand as testimonials to the ageless beauty power of Dead Sea bath salt.

Nothing like regular salt, Dead Sea salts are comprised of a wide variety of minerals which are present in a high concentration. Whereas regular sea salts is made up of over 90% sodium, salt from the Dead Sea is only about 10% sodium and the rest is made of minerals which are essential for the proper function and health of skin. The minerals present in the salt (mostly magnesium, potassium, bromine and calcium), are also naturally present within skin cells but commonly get depleted which can cause severe dryness, wrinkle development, and dull looking skin.

People from all over the world travel to the Dead Sea to get relief from their skin ailments such as Psoriasis, Eczema and more. There are many spas and skin therapy centers located on the shores of the sea to take advantage of the healing powers of this most unusual body of water, many of which offer Thalassotherapy treatments. 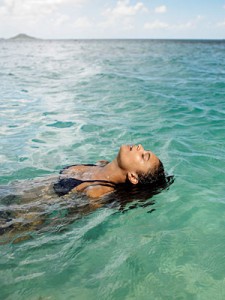 Have you ever run across this word at a spa or read about while looking at a spa menu, and not quite known what it was?

It is a combination of thalassa, the Green work for “ocean,” and therapy, or treatment.  Thalassotherapy involves the medicinal use of seawater from all sensory facets – it is an experience of holistic wellness.  Seawater is believed to be the origin of all biological life, and its various metals and minerals, algae and salt are essential for life in general.  True Thalassotherapy includes incorporating all of the healthy marine elements found in ocean waters,  by way of water exercise, ingestion of salty air, absorbing minerals through the pores, and eating healthily.

These are some of the benefits Thalassotherapy provides: 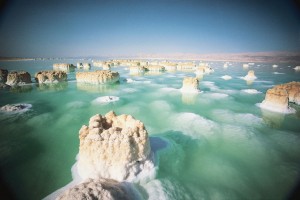 Rene Quinton (1866 – 1925), also named the “French Darwin”, was a naturalist, physiologist and biologist. In 1904, he was the first to discern that human blood and seawater contained identical nutrient ratios. He endeavored to solve the mysteries of sea water and its compatibility with living organisms by proceeding to carry out several scientific experiments in hospitals. The results he obtained were dramatically unexpected: several people who were expected to die, did not, and recovered fully.  His introduction of this theory contributed to the practice of Thalassotherapy on the coasts of southern France, and gave birth to this form of sea-based therapy, now found all over the world in all kinds of spas, fancy or plain.

It seems as though Quinton scientifically validated what ol’ Cleopatra knew two thousand years ago:

Thalassotherapy works when trace elements of minerality from magnesium, potassium, calcium and sodium are ingested into the lungs and pores.  This has the effect of improving circulation and providing natural moisture to the skin, as the skin “breathes” in the seawater.  Mud baths, hydrotherapy (bathtub soaks), massage and wraps usually include techniques from this ancient ritual.

You don’t have to live like the exotic Queen of the Nile or be able to jet off to the Dead Sea on a moment’s notice  to enjoy the benefits of  thalassotherapy.   High quality Dead Sea salts are available over the internet for very little money.  And here are some easy, home-made ways to enjoy Cleopatra’s secrets (recipes following): 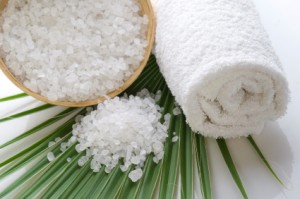 For every 8 ounces of Dead Sea salts, mix in 2 or 3 drops of each essential oil to start (online sources are good for purchase of both plain (unscented and unmixed with any other substance) Dead Sea salts and essential oils.   Remember, essential oils are highly concentrated, and their aroma is released over time.  Put your salt mixture in an airtight container for a day or so, then smell again.  If you still want them stronger, then add a couple more drops.

When you get ready to have your soak in the bathtub, throw in a couple palmfulls of your mixture, and keep the water just comfortably warm.  Water that is extremely hot will cause your body to start sweating and purging in reaction to the heat, and while this is a good thing under other circumstances, in the case of working with the salts, you want the body to do the reverse:  absorb, rather than release.  Give yourself a good 20 minutes at least, longer if possible, to allow your body to fully absorb the salts and the essential oils. 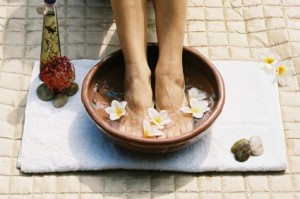 A quickie version of a whole body bath soak, is to just soak your feet.  The feet are wide open portals for the action of the salts and oils to enter into your circulatory system.  After a long, stressful day, nothing is more relaxing than a good foot soak in a pretty bowl.  Make sure the water level is at least up to your ankle bone. Drop a few flower petals or fresh herbs such as rosemary or spearmint into the bowl, and you’ve just given yourself a high dollar spa treatment!