Drinking In The Joy

Drinking In The Joy 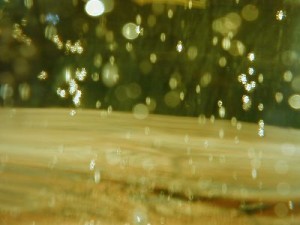 Many years ago, one evening on a late August day, I was in my backyard watering a row of sunflowers I had planted against a side fence.  It had been another hot, dry day, and I enjoyed the pleasure of getting slightly splashed at the same time I was watering the flowers.  The cool water felt good against my dusty toes.  I pushed my thumb against the hose opening to create an arcing spray that reached out in front of me by ten or fifteen feet.   My mind drifted as I lazily played with the water; the last rays of the sun caused it to sparkle if I angled it just so. Slowly I became aware of a ruby-throated, male Anna’s hummingbird swooping through the ends of the water spray.  He’d fly through, disappear, and a few seconds later, reappear and repeat the process.  It took me a while to figure out the bird was using the spray as his drinking fountain. To the Native Americans, the hummingbird is Joy.  I saw my visitor as a welcome gift.  Delighted, I held the stream as steady as I could, held my breath and stood very still.  He began fluttering in and out of the water stream, making his circling arcs a little tighter and closer with each one, the brilliant green of his feathers flashing in the light.  I felt he was showing off for me a little bit, and I was mesmerized.  And then in a split second, at the same moment I vaguely remember thinking that he was getting perhaps a little too close to the water, the spray caught him just so and slammed his little body to the ground.

I dropped the hose in a panic and ran over to him.  He was lying soaked on the grass, with his eyes open, barely breathing, in a state of “drowning”.   I hesitated for a moment, thinking about what to do.   I had drowned my Joy.  This could not stand.  So I gently s 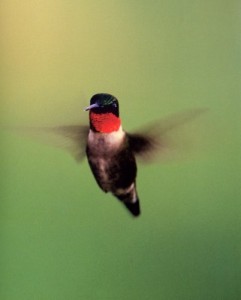 cooped him up in my hands and made a covered tent out of my palms.  He was utterly still.  I held him close to my mouth, whispered an urgent plea for him not to die, and began slowly exhaling hot breath on him.  I don’t know why I did this, or for how long.  I had never performed CPR on a human person much less a drowned little bird.  But miraculously, after a few moments, his chest fluttered and heaved and he blinked several times.  Joy was not dead! His eyes seemed to be trying to focus on the source of the warm air blowing on him.  He looked at me as I silently chanted “please live, Joy, please live.  Joy, please live”, hoping I was mind melding with him strongly enough to matter.   After a few nerve wracking moments, he exhaled  a small, fluttering sigh, then roused himself and lifted up his head.  Then he rolled over and lay flat on my palm as he steadied himself.  Finally, he launched himeself upward and flew quickly to the top of a nearby orange tree.  I watched him to make sure he wouldn’t fall out of it, in some kind of delayed reaction.  To my great relief, he chittered for a bit and then buzzed off.
I picked up the still running hose and turned it off.  My feet were soggy, my heart pounding in my chest.  I was overjoyed at being able to rescue the hummingbird.  I marveled at how such a precise flyer can mistake distance and space, and be seduced by water to such ill effect.  I bowed to the spirit of the bird that allowed him to surrender and let himself be saved (by a hot-breathed giant no less), and to his innate impulse to get up and fly again.

I consider it extremely lucky to have experiences like this.  It breaks through the ordinary nature of our day to day undertakings.  The randomness, the swiftness of these kinds of events, makes them seem a little surreal.  I think about something a Native American teacher told me once.  She explained how important just this kind of thing is in awakening our connection to Spirit.  She said we need to put ourselves as often as possible outdoors, in and around nature, in any way we can.  And she emphasized that “nature” can be found anywhere from the backyard to a mountain trail, from a city park to a remote desert.  Simple or extravagant, the more we engage with and spend time in nature, the more we have the potential to bump up against the messages Spirit is sending through the animals, the plants, the weather.

We can tune into those messages, for they always there, like a radio ready for us to find the frequency, by close watching, waiting and listening.  How we interpret those messages is entirely personal and might change as time passes.  But they should be sought out and savored.  So I have the hummingbird rescue, a little red and green jewel nestled in my memory in a velvet lined treasure box, as one of my most favorites.  I  open it up and take it out to marvel at it every so often.   The message I feel Spirit wanted me to understand?  Joy comes, joy falters, joy abides.