Making the right choice on Fish 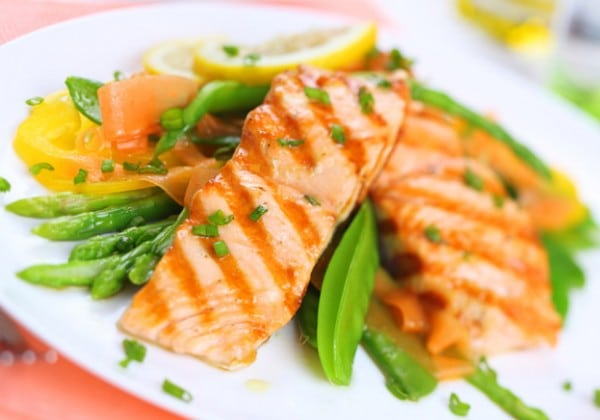 Fish can be a staple of a healthy diet. The lean protein and Omega 3 acids have countless health benefits but choosing the right type of fish can prove to be a challenge. Seafood consumers in today’s world would be wise to consider the issues surrounding both farmed fish and wild caught, in order to be a better consumer and steward of the Earth.  Any kind of choice to eat fish is now is more than one concerning taste, but includes issues for the health and wellbeing of the oceans, lakes, and rivers that provide them.

On the farmed side a lot of farm raised fish tend to be high in antibiotics and hormones. Meanwhile on the wild side you have a much higher risk of getting fish with large amounts of mercury. Wild caught fish are also typically more expensive.

In general, experts will say that wild caught fish are probably better for you overall. This is likely because they are from a more natural state, much like the difference between free range chickens vs. caged chickens.  But what is the real difference? Let’s go over each in a bit more detail. 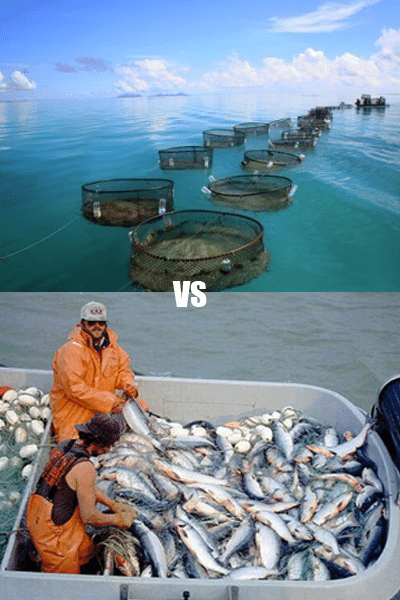 Much like farmed chickens farmed fish are kept in cages or tanks and are more packed into confined areas. As a result they swim in water that is contaminated with their own excrement. This also makes them more prone to sickness than wild or “free-range” fish. For these reasons farmers will use antibiotics to prevent sickness and this can affect the final product that ends up on a consumer’s plate, affecting the taste. Consuming these fish also means that you are eating all the antibiotics and hormones they have been fed as well.

Some fish farms also use hormones to grow larger fish and chemicals to keep the water around the farms clean. Some farmers even use artificial dyes to give the fish brigheter colors and make them visually more appealing (typically done with salmon). Additionally, farmed fish can sometimes be fed diets of corn, soy or other products that contain little to no omega 3 fatty acids which are one of the most beneficial aspects of having fish in your diet. It is important to note that the reason wild fish are so high in beneficial nutrients is that they have eaten the nutrients themselves from the body of water they live in (seaweed, kelp, plankton, and other nutrient dense plants).  This is what also gives them their strong fish taste.  When they are farmed and cut off from the diet they would have in nature, then their value as a nutrient dense food plummets, as well as their unique taste.  Many people opt instead to eat the sea vegetables, rather than the fish, to obtain the same health and flavor benefits without the detrimental issues associated with farmed fish.

On the other hand some experts believe that fish farms have been unfarily criticized. Many US fish farms do not use dyes or hormones and circulate the water in their farms to help keep it clean and free of disease causing bacteria. Fish farms, it can also be argued serve to satisfy a real world need and help provide food for an increasing world population that is searching for inexpensive ways to feed itself. So many of the world’s oceans have been overfished that fish farms help to replenesh the stock of certain species. Wild fish can cost more than twice as much as farmed fish which are much cheaper to produce. These savings get passed on to the consumer.

The National Oceanic and Atmospheric Administration (NOAA) says that strict regulations are in place for fish farms in the U.S., and that “the use of antibiotics and other drugs has been reduced dramatically.” However, nearly 90 percent of the seafood consumed in the U.S. is imported, often from countries that don’t have the same standards. So it’s also important when buying fish to consider the source.  But often there is no place of origin on grocery-store fish, nor in restaurants, making your ability to know extremely difficult. Better restaurants will always be able to cite their sources when asked, and demanding labeling from your markets will also go a long way toward solving this dilemma.  Better yet, buy from your local, owner-operated fish monger or fish purveyor at your farmer’s market. They have often caught the fish themselves or work with fishing co-ops that operate under strict guidelines for catching and labeling their fish to their buyers.

The biggest problem with wild caught fish is going to be exposure to mercury, other industrial pollutants, and pesticides from farm runoff. Larger, older fish that live long and high on the food chain (ie. tuna, swordfish, shark etc.) tend to contain more mercury than other fish. As a general rule, these larger predatory fish accumulate more contaminants than their smaller non-predatory counterparts.  These are the types of fish that dwell closer to the bottom of the ocean and tend not to live very long such as bass, flounder, fluke, sardines and mackerel. These fish typically don’t have life spans long enough to accumulate large amounts of mercury and their populations are relatively heathy. The Monterrey Bay Aquarium’s Seafood Watch List continually updates an excellent guideline for seafood consumers which details which fish are lowest in mercury and other contaminants (wild Alaskan salmon and halibut top the list), which should be avoided altogether for health purposes, and which should not be eaten at all as they are severely overfished and in danger of extinction (Bluefin or Toro tuna). You can download it here: http://www.seafoodwatch.org/seafood-recommendations/consumer-guides

While it’s smart to pay attention to mercury and other contaminates most experts agree you’d have to eat large portions of fish with high mercury loads daily to be impacted by it. In 2012 the average consumer ate 14.4 pounds of seafood, according to the U.S. Commerce Department.  This falls short of the 6 to 8 ounces a week recommended by health experts for people wanting to obtain the specific nutrients (protein, Omega 3s, Vitamin D, selenium) for their diet through fish. It also pales in comparison to the average 82 pounds of chicken, 57 pounds of beef and 46 pounds of pork the average U.S. consumer eats each year.  It should be noted that limiting your consumption of seafood does not have to limit your consumption of beneficial nutrients.  You can eat a rich and interesting selection of sea vegetables  (the Japanese are connoisseurs of them) and get your Omega 3s from plant sources such as walnuts, avocados, flax, hemp & chia seeds.  Cutting back on all animal-based protein from land and sea is probably a good idea for all the reasons we’ve been discussing.  Using our increasing awareness of the importance of knowing how our food makes in onto our tables is not merely an intellectual exercise anymore, but a necessity for maintaining our health, and the long-term health of the planet. 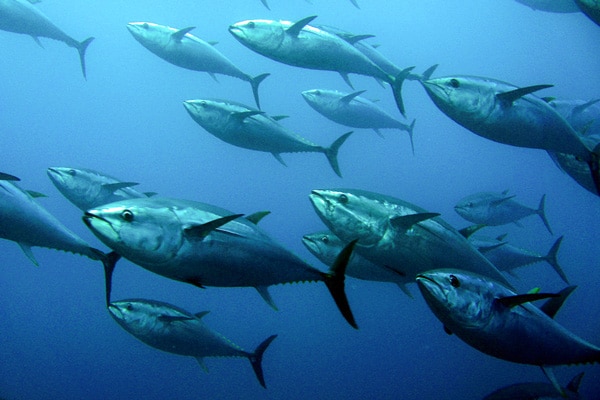 “One in five people on this planet depends on fish as the primary source of protein.” — Food and Agriculture Organization

“We are in the situation where 40 years down the line we, effectively, are out of fish.” —Pavan Sukhdev, UN Environment Program

Additionally, ¾ of the world’s fish stocks are being harvested faster than they can reproduce. Eighty percent are already fully exploited or in decline. Ninety percent of all large predatory fish – including tuna, sharks, swordfish, cod and halibut – are gone. Scientists predict that if current trends continue, world food fisheries could collapse entirely by 2050.

The most prized species are already disappearing. The 1990s saw the widely-publicized collapse of several major cod fisheries, which have failed to recover even after fishing was stopped. World Wildlife Fund predicts that the breeding population of Atlantic bluefin tuna — one of the ocean’s largest and fastest predators, and sought-after as a delicacy used for sushi (known as toro) — will disappear within three years unless catches are drastically reduced.  It’s absence will cause a disastrous chain reaction up and down the food chain in the oceans where it lives.

When making a mindful and conscious decision about what types of fish to eat, environmental and ocean health issues should be a primary concern as they are vital to the overall discussion of eating farmed vs wild caught. If the delicate eco-system in our oceans is disrupted, no one will be eating any fish at all in the future. So these issues should be one of the foremost concerns when considering what types of fish to consume.  One way you can help, is to be vocal at Sushi restaurants that still feature Toro on their menu and/or boycott them if they refuse to remove it.  Another is to reduce your overall fish consumption, and eat strictly off “safe” list for species not in danger of extinction.

After weighing the pros and cons, which seems the better choice?

Whatever you choose, be sure to closely examine all the facts and rest assured that despite the nuance of eating farmed fish vs wild caught, the benefits of eating some fish can be a very healthy addition to most diets.

So go fish, just not so much!