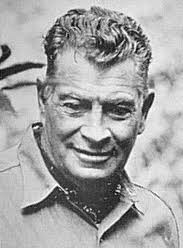 The OG forager was Euell Gibbons, a wild food advocate from the middle of the last century.

I just finished re-reading a book of essays put out by The New Yorker magazine editors few years ago called Secret Ingredients, a collection of food and drink writing since the magazine’s inception over 80 years ago. One that just blew me away was by John McPhee, and the week in 1968 he spent foraging in the Pennsylvania wilderness with Euell Gibbons. Besides the pleasure of his fine writing style, McPhee very poignantly captures the personality of this fascinating and amazing character that was Euell Gibbons.

In 1968, Gibbons was at the height of his renown as a true American naturalist and writer. His first book Stalking The Wild Asparagus, published in 1962, was a national bestseller.  My own beloved copy of this book is completely dog-eared and marked up, but I never knew that much of his life story.  He was a Quaker, a former schoolteacher, a railroad hobo during the Depression, and a frustrated writer of novels and short stories. But he hit his stride writing about something that he’d learned to do as a child to keep from starving, and continued to do all his life, from the pleasure of it: the gathering and preparation of wild food – most commonly known as foraging. His talent in the creative preparation of these foods earned him the moniker of greatest living wild chef when he was alive. (He died in 1975 at age 64.)

Gibbons once harvested edible weeds from the President’s garden at the White House, bagged 15 wild foods in a vacant lot in Chicago, and collected materials for 3-course meal from Central Park in New York City. His interest in wild food was to prove simply that there is a marvelous variety of good food in the world that is only partially found in supermarkets, and that mass production of just a tiny fraction of “cultivated” foods is contributing to the demise of the planet and our ability to feed all its people. One need never go hungry when one is a friend of nature.

As a Quaker, Gibbons was a pacifist and apeacemonger, and lived in intentional communities long before they were popular. His goal in foraging was to engage in “creative protest against the artificiality of our daily lives.” Though he was a product of the first half of the previous century, and was embedded with folksy, rural values, his perspective is timeless, sophisticated, and very inspiring.

Everything Old Is New Again

Food conversations everywhere are about crop sustainability, organic and local farming, seasonal ingredients, and so on; things old Euell was preaching about over 50 years ago. I think his message is especially timely as we are all increasingly grappling with ideas about how to reduce pesticides in our food, and wondering how to creatively feed the exploding world populace. We have much to learn by studying the writings of this visionary and teacher.